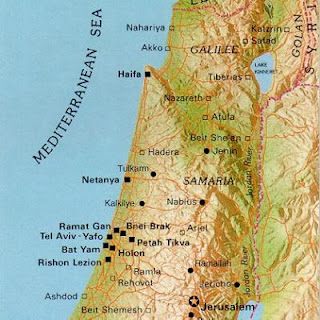 John 4:4-15 “And He had to pass through Samaria. So He came to a city of Samaria called Sychar, near the parcel of ground that Jacob gave to his son Joseph; and Jacob’s well was there. So Jesus, being wearied from His journey, was sitting thus by the well. It was about the sixth hour. There came a woman of Samaria to draw water. Jesus said to her, “Give Me a drink.” For His disciples had gone away into the city to buy food. Therefore the Samaritan woman said to Him, “How is it that You, being a Jew, ask me for a drink since I am a Samaritan woman?” (For Jews have no dealings with Samaritans.) Jesus answered and said to her, “If you knew the gift of God, and who it is who says to you, ‘Give Me a drink,’ you would have asked Him, and He would have given you living water.” She said to Him, “Sir, You have nothing to draw with and the well is deep; where then do You get that living water? “You are not greater than our father Jacob, are You, who gave us the well, and drank of it himself and his sons and his cattle?”

The woman said to Him, “Sir, give me this water, so I will not be thirsty nor come all the way here to draw.””

The Witness Skit was something I wrote with my buddies Dan, Larry and Paul back in high school. The skit was about the story of the Samaritan woman found in John 4. The disciples are talking and see a woman at the well, so they discuss the best way to go and tell her about Jesus. They have several false starts before they end up watching Jesus as He talks with her, learning from His example. I want to do that today as we continue talking about Jesus Words.

Witness did not happen with the disciples!

The disciples were following and learning from Jesus about what He was calling them to – to become more like Him. The disciples were drawn from ordinary men from across the strata of society. In this story, the disciples had no influence on the woman at the well. Why is that? Let me suggest a couple reasons:

They were too busy. Reading verse 8 and verse 33 of John 4 we see they went in to the city to buy food. They had a task on hand and seemed to focus on that. While they were gone they missed an opportunity. We don’t see any results from the city for them having gone there. I apparently have some issues when it comes to multi-tasking. What I always need to do, though, if have in the back of my mind who I am in Jesus.

They lost their focus. It is like having a program but forgetting why you are doing the program and so you begin to run it for its own sake. There is the story of the community that lived by the sea. There was no magic dragon but there were shipwrecks – many of them in fact. Over the years they helped many people along the dangerous coast survive. They would run training seminars on search and rescue and first aid. After time they decided it would help if they built a lighthouse, and so they organized and did just that. The light worked and saved many a ship. As such, they had some extra time and a reason to celebrate, so along with nightly lighthouse-keeping duties, they built a hall and celebrated and had many wonderful parties. Time went on and they struggled to keep up with the costs of running the lighthouse, especially when ships weren’t crashing any more. They eventually turned off the light and became a social club that met for parties. And so the ships began to once more run aground… Jesus talked about making them fishers of men, and here they were busy buying fish sticks. We do things for reasons beyond just the social here. We are connected through the Holy Spirit to encourage and model and to be involved in the body of Jesus, the church. It is not about the program, whether it be floor hockey or a small group or the Sunday Service – the program is just a tool, and tools can change and be sharpened.

They were too bound by culture. The disciples were surprised Jesus was talking to a woman, and a Samaritan woman at that. It went against generally accepted cultural norms. What we need to do, though, is get outside of those norms, and see everyone with the eyes of Jesus. Now, the disciples missed the boat, but Jesus didn’t. We see the story unfold from His perspective, so let’s talk about the example He left us here.

Witness happens in the midst of conversation!

Everywhere Jesus went we see Him in conversation. Society was different then, but that does not mean it was worse or better. The example we have is that Jesus engaged people in conversation. He found ways to chat. Maybe He started with the weather, but we do know He was thinking ahead. Do you know somebody who is really excited about something? What happened when the Riders were in the Grey Cup game? It was on everybody’s lips. Everyone was talking about it because they were excited. It was thrilling. How exiting and thrilling is Jesus and your relationship with Him. Maybe one of the reasons the Church in North America is declining is because many of us just aren’t that excited about Jesus, about salvation and holiness, about spiritual blessings. Jesus was excited about His Father and His kingdom. He talked about it all the time. Find ways to be excited, to have conversations that lead to how wonderful God is in your life. Take some time to consider all He has done for you. Use language that people can understand. Telling your neighbour who has only set his foot in church at a funeral that he is lost and needs to be holy and let Jesus into His heart may not go far for the simple reason he looks at you and says, “Huh???” He doesn’t get the meaning of any of those, because he knows where he is, he is fine without holes in his stuff, and how can someone get into his heart when it is in the middle of his chest? A tribe in South America accepts Jesus into their liver, because that is where the seat of life is for them in their culture.

Witness happens in the midst of vulnerability!

Jesus did not start His conversation with the lady by hitting her with the Torah saying “Repent, you are a sinner!” He said I have a need – “I am thirsty.” Sometimes we are too self-sufficient. I struggle with this. I plan my own way to do things and am more than happy to help someone or give them a ride, but there is a bit of pride in me that says, “I don’t need help myself!”

Witness happens in the midst of Grace!

Notice the focus was not on whom the person was – a Samaritan woman who was living a promiscuous life. It wasn’t about how many wrong things she was doing. It wasn’t about her faith and where she was wrong in that. It was about how much God loved her, and that she needed to hear the Good News that Jesus had to offer. You will never be effectively used by God to bring people to Himself if you don’t believe they are worth it. Did Jesus really die for them like He died for me? Absolutely! The homeless person needs Jesus as much if not more than us who have a warm place to lay our head. Jesus said He didn’t come to heal those who were well, but the sick. His grace transforms people. We have this conference coming up in March about God creating each of us in His image with wonderful gifts and how we can use those things to make significant changes in our lives. Some people don’t need to come because they don’t need or want any changes, but I do know we all need to be reminded about how strong and how wonderful God has created each of us.

Don’t be too busy, too caught up in living life that you miss the opportunities all around you. Pray every morning, “Lord, give me a chance to talk about how happy I am to be your child to someone today. Maybe you need to help me be happier or show my happiness better, but Father, I truly am. Don’t let me miss an opportunity. Lead me on.”